KatrinaGumal is a collection of lovingly handcrafted items, each piece patiently created with care and attention to be as unique and individual as you.

If you have any inquiries, please feel free to drop me an e-mail at katrinagumal@yahoo.com. Suggestions / comments are also welcomed and highly appreciated!

I was watching the TV a few days ago and there was a segment about the tragic earthquake and massive tsunami that hit Japan on March 11 last year. Right away, I was reminded of this blog post which I've been drafting since then. Yes, this post is LONG overdue. It's been more than a year now - how time flies!

A few years back, I wanted to visit Japan badly... And, when Air Asia launched its new destination - Tokyo, I was thrilled but after I read so many comments about the difficulty in getting the Visa, I decided to forget about it...

Then, the opportunity came in January 2011 when I was nominated as a participant for a 3-days training in Tokyo. I was very excited! :) Getting a Visa to attend a training was much easier. Not many documents were required and most of them were prepared by the organiser.

My training was in March. On my 1st day of training, it snowed! :) It was really unexpected as it was already spring at that time... The snowing wasn't heavy though, and by the time my training ended on that day, the snow had already melted. Too bad, I didn't even get the chance to touch them...

Before I went to Japan, I had already planned to extend my stay for another day. The organiser and coordinator were fine with that so long as I cover my own expenses and accommodation for the extended stay. Since it was my first time visiting Japan, I wanted to go sightseeing.

So, on my last day in Tokyo, I went to the Tokyo Tower. It was an interesting place indeed. For those who wish to visit the Tokyo Tower... One of the ways is by taking the Mita Line subway, then get down at the Onarimon station and exit at A1. From there, you'd have to walk a short distance to the Tokyo Tower but fret not, as there are sign boards along the way to indicate the direction. Entrance fee to the Main Observatory is 820 yen but, if you'd like to get to the Special Observatory deck as well, you can purchase the combo ticket at 1420 yen. 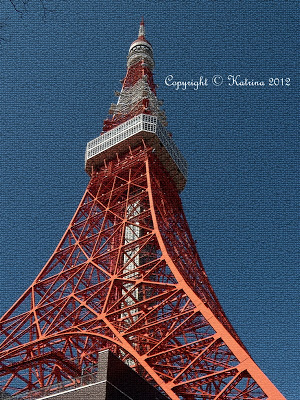 I had an early flight the next morning so, I decided to stay at a hotel nearer to the Narita airport. I chose the Nikko Hotel. A standard single room cost me not more than MYR200/night. Room was clean and comfy, and not as small as I imagined. I got the low rate through Agoda.com

Nikko Hotel provides shuttle bus service. From the Yaesu Fujiya Hotel where I stayed during my training, I took a bus to the Narita airport. And from the airport, I took bus no. 33 to get to the Nikko Hotel. If you get to the hotel early and wish to go sightseeing, they do provide shuttle bus to the Narita city as well. I arrived late and didn't feel like going out so, I just shopped for souvenirs at the hotel's lobby. Prices offered there were affordable, not much difference from what I got at Asakusa and Tokyo Tower earlier on. I bought quite a lot and even managed to get a discount of almost 500 yen :)

Overall, I really enjoyed my stay in Japan. I hope that I'll be able to visit Japan again, someday... I do miss Japan and the food (a lot).